So you have been using cannabis for yourself or your child, whether that is high CBD or high THC or any ratio in between, and you feel that it is no longer working as it once did.  Are you going crazy?  How did it work so well for weeks, even months, and now it is not working like it used to? You are starting to wonder if you imagined it all.  Doubt creeps in, and you begin to second guess everything. Is that brand of the product no longer any good?  Was the new bottle you purchased mislabeled?  How did it go from amazing effects to almost no effect so quickly?

Well, you aren’t crazy.  The product you purchased is probably just fine.  The amazing effects you first saw from your cannabis product can and will come back once you understand what is happening.

If you are starting cannabis and you see the first thing you try working great for a few weeks to a few months and then it no longer works well, what you are seeing is called the honeymoon effect. This type of effect, as described by The Epilepsy Foundation, is seen in some individuals where the effectiveness of a new medication tends to wear off over time after doing very well for some weeks or, more often, some months. Many patients who are said to have “medically refractory epilepsy” are those for whom the honeymoon effect is most prominent. We also see this same phenomenon when families are just starting to use cannabis to help manage the symptoms of autism.

But if you have been using cannabis for a bit longer, more than about three months, and efficacy begins to wane, that is what we call tolerance. This type of tolerance tends to be seen more so with THC than CBD. The receptors THC binds to become less dense with consistent prolonged use, and these receptors are no longer available to be activated. In our support group of families, those using primarily THC have found that tolerance often develops within weeks to a few months of starting a particular product or strain. Doing a quick google search, you can find many other articles describing tolerance to cannabis, THC in particular.

If you are using CBD primarily and see that the product you are using is no longer effective, that has been described by Dr. Bonni Goldstein as reverse-tolerance. Reverse-tolerance is also called drug sensitization, where less product is needed overtime to get the desired effect. We see this occurring often in our support group of families, usually after 6-7 months of using the same product(s). There was a recent study done using a 20:1 CBD to THC product where 25% of the patients developed a tolerance after an average of 7 months of use. The article describes a tolerance to either the CBD or the small amount of THC used. Upon discussing this article with Dr. Bonni Goldstein, she insisted that these researchers don’t realize it was a reverse-tolerance they were seeing and that they could avoid that type of tolerance by following the tips mentioned below.

There is one other form of tolerance that we often see with our families, and that is cross-tolerance. Cross-tolerance is defined as resistance to the effects of one substance because of exposure to a pharmacologically similar substance. Research has shown a possible cross-tolerance between alcohol and cannabis and psilocybin and cannabis as well as cannabis and barbiturates, opioids, prostaglandins, and chlorpromazine. Families who have children or adults using large amounts of pharmaceuticals have reported that they often need larger doses of cannabis vs families who have not used pharmaceuticals. Once they are weaned off these other medications, it often takes months to years for this type of tolerance to dissipate, and they begin to see that the therapeutic cannabis dose is much lower than when they first started.

From working with families for a few years, we have seen it all and we have seen families try various things to make cannabis work well again once it no longer works like it first did. The trend that we have seen with successful families is the following.

Long term success is achievable with cannabis. There are possible pitfalls along the way, which can be confusing and overwhelming for people just beginning on this journey. Once you understand these potential pitfalls and how to work around them, the success seen can be life-altering, and in an amazing way.

Want to learn more about how to use cannabis successfully for autism?

Access our “Learning” area to read all of our files, watch our past webinars, view our educational info-graphics and review the data we have gathered. 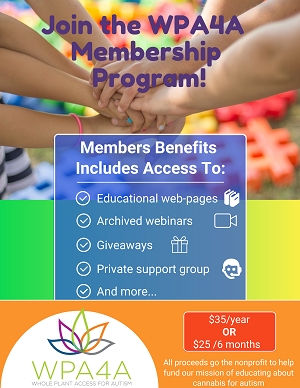